A Practical Case Study in Cost-Benefit Analysis - did you want Popcorn with that?

A process by which you weigh expected costs against expected benefits to determine the best (or most profitable) course of action.
http://www.entrepreneur.com/encyclopedia/cost-benefit-analysis

A few years ago I was at a customer site in Independence, Missouri. It is a classic American town, sitting on the eastern edge of Kansas City. One of the advantages of working for a company with a wide-spread customer base was that I had the opportunity to visit a lot of different places.

When money has been spent to get you there, you had better make the most of it - so you maximize the hours you spend with the customer. However, when the working day is done there is an opportunity for personal benefit and exploration as well. So wherever I went, I made sure to learn about the local history and try to see a few attractions.

It's all about maximizing the value for the cost - which is the primary basis for cost-benefit analysis. In this case, the personal cost was not financial, but in time away from family - so it was worth my while to see the sights that I could in the time that I had. Especially when somebody else had already paid to get me there.

With a population of 119,000 Independence is more like a small city, but they have preserved their identity and character despite the closeness to their larger next door neighbor, Kansas City (pop 467,000). It's just what you might expect from a town called Independence.

Although I was only there for a few days, I made the most of my visit and thoroughly enjoyed having a look around the place while I was there. Few attractions were open after working hours, but I did manage to fit in a tour of the Harry S. Truman national historic site before it closed for the day. It was a nice southern-style building - not huge, not opulent - but it was a good, solid building with nice architectural features. 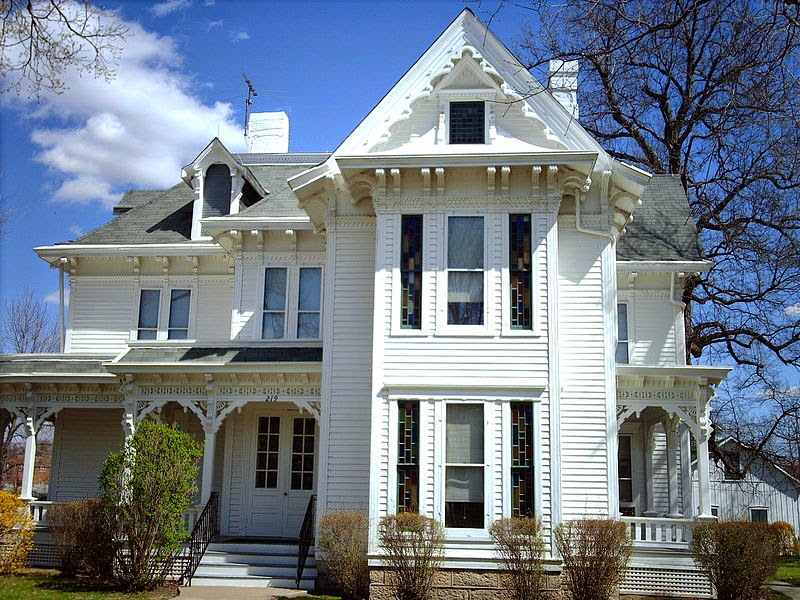 In fact, it was his family home. We were only allowed to tour the downstairs, as Bess Truman wrote into her will that in order to protect her family's privacy, the second floor was to remain closed until the death of her daughter, Margaret. Though Margaret died in 2008, the second floor has remained closed in order to better preserve the home.

For a President who took America from its traditional isolationism into the age of international involvement, it was a sign of his firm connection with his roots that he and his family lived in this same comfortable house since his marriage in 1919 until his wife Bess died in 1982. Having visited a number of other presidential national historic sites, this was the one that I liked the most. Unlike the imposing columns and the expansive property of Mount Vernon, this felt like somewhere a real person lived - not someone larger than life.

The next evening, I finished work too late to see any other historic sites, so I decided to see a movie. At least, that was the plan.

Someone at the office had recommended a theatre that was a short drive away in Overland Park. There were closer theatres, and it was about a half hour drive, but they said it would be worth it.

So off I went, picking up a sub sandwich on the way. I still had it in the bag when I arrived at the theatre - I wanted to make sure I would be there early enough to get a ticket and the movie was starting in an hour. The way the person at the office had talked it up, I was a bit concerned about a full house.

I parked, locked the car and walked up toward the ticket window of the Rio Theatre. It was a building with an art-deco style facade, with plenty of neon lights wrapping around the sign board showing the name of the movie. 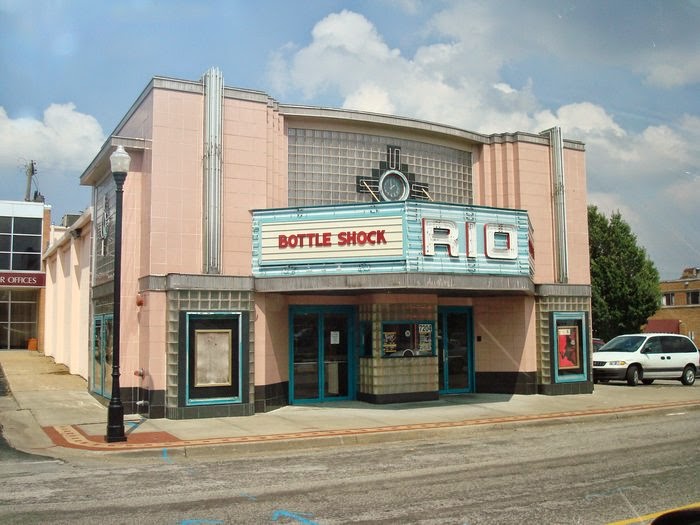 When I reached the ticket window, a young man smiled at me through the glass.

I opened my wallet and handed him a twenty. He passed back a ticket and twelve dollars in change.

I was tucking the change into my wallet when he said "Um, we need three more."

"What?" I asked, looking at first at my wallet, then back at him.

"We need three more people before we can open the door."

I looked to the side and saw eight people waiting in their cars. The parking lot was otherwise empty. "Why?"

The young man sighed. "We need at least twelve people or it costs more in electricity to run the projector than we take in ticket sales."

"Okay..." I said, as I turned and walked back towards my car. I looked at the other people sitting in their cars. A couple glanced in my direction.

I went back to my car and unwrapped my dinner. As I ate, I watched the ticket window. About fifteen minutes later I was finishing up my sub as four more people arrived. They seemed to study the playbills off to the side of the ticket window for a long time.

Come on, come on, I thought, checking my watch.

Finally, they walked up to the ticket window. Money was exchanged, tickets were handed over and five car doors opened.

The art deco theme continued inside. I bought some refreshments and went inside the theatre itself and took a seat near the back. It was well appointed, with hidden lighting along the walls. There was open floor space along the sides, and I sat in a spacious dark brushed velvet seat as I took in the art-deco framed rich velvet curtains at the front. It wasn't over-done, and you could easily imagine people dressed to the nines coming in for an evening's entertainment of moving pictures. I looked all around the theatre while the lights were still on, taking it all in.

I was almost disappointed when the lights dimmed for the movie. 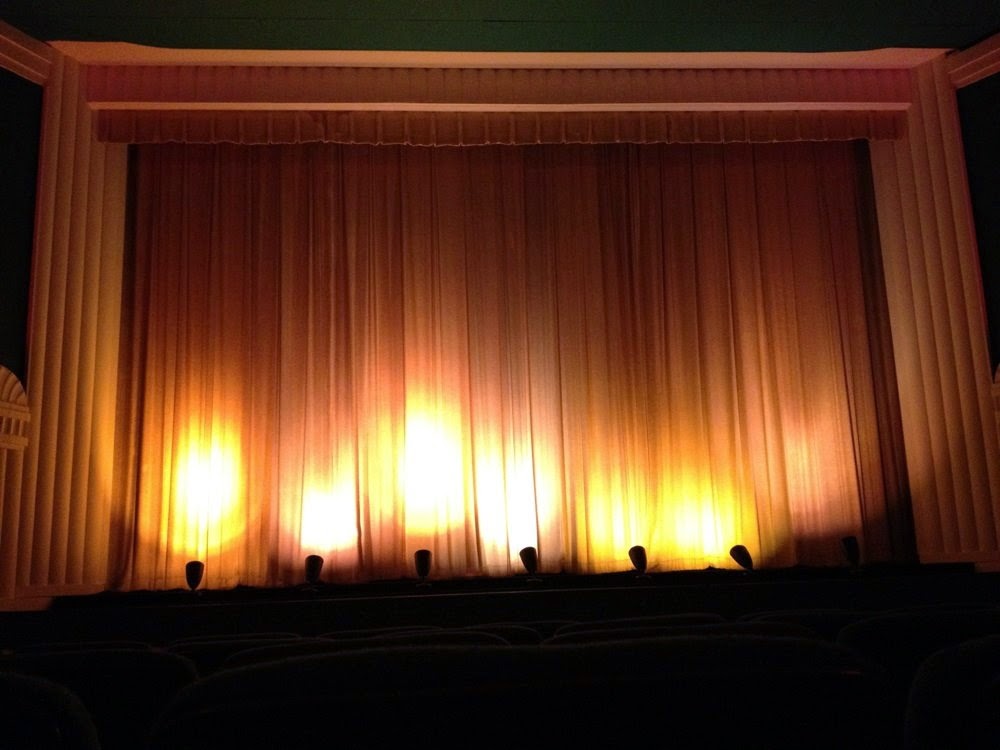 An hour and a half or so later the movie finished and the lights came back on. The movie itself was OK, but being able to experience the obvious care and attention to detail in this beautiful art-deco style fine arts cinema was, to me, more than worth the price of admission.

Is it worth it?

You also apply it regularly in your own life - for example, when you walk by an ice cream store, you may pause to consider whether to go in.

Is a sweet, creamy cold dessert worth parting with a few dollars?

Of course! So you go in and look at the board above the counter.

What flavor to choose?

Well, there are so many good ones - why not have more than one? Suddenly you have two cost-benefit decisions to make, all at once. If you buy two or three scoops, you get more taste variety for your tongue, and sure the cost is a bit more - but are those extra calories really worth it?

Maybe I should just get two scoops, not three.

So you wrestle with the options, and settle on two scoops. You can't have just one scoop, you reason - it would be lonely (or any other weak justification for having that second scoop). But you feel better (or less guilty) about not having the third scoop, even though you had enough change left over to get it.

In your projects, just as in life, there will be trade-offs, compromises, and value judgments. Some may require formal business cases with explicit hard expected benefits and deliverables for the estimated cost. Many more decisions will be less formal, in the day to day decision making of the project manager. But it is rarely going to be black and white.

In addition to any financial benefits from your project, you also need to consider other factors such as:

Often, you will be considering the expertise and opinions of others when you do your cost-benefit analysis. This may be in the form of your best friend being a sounding board about that third scoop - or you may be presenting a case to your Project Board, who will make the final decision based on the best available information for significant decisions.

But when it comes down to it, in your projects and in life, when you factor in the various considerations, diagnoses, opinions, research and the myriad options that can feed into a decision - the basic question is simply "is it worth it?"

The truth is that we don't always know what the right decision will be, even when we make it with the best available knowledge. The theatre had their own baseline cost-benefit decision they had to make at every showing of a movie. On most nights it would not even come into play - but on a quiet Wednesday night, that is the scenario I came across.

They had a hard-cost factor to consider. The electricity cost to run the projector for a movie was around $100, or so the young man at the ticket booth claimed. They needed 12 tickets to be sold to be close to covering that cost; it was their baseline threshold and without that many seats sold, there would be no movie.

For me, the cost-benefit formula was a bit different. When I first arrived at the ticket booth, I had just been planning to see a current movie, at a reasonable price. My colleague had talked up the theatre, so I was willing to drive thirty minutes to go to the Rio, rather than the one five minutes away from my hotel. By the time I got there, it would not have been worth driving back to a different theatre. So I waited, uncertain if I would be able to see the movie and getting slightly annoyed. But it was still was worth waiting, rather than giving up and heading back to the hotel.

It had never occurred to me that there also might be something special inside the theatre. The person at the office had said it was a nice theatre, but had not gone into specifics. Had I known what I would see inside (forget about the movie for a minute), I may have been prepared to make a different decision.

Looking back at it, and considering how far I had come to see this one-screen theatre (half an hour plus several thousand miles from home), the likelihood that I may never come to this area again, and what I would experience inside the theatre, I would have been prepared to make a different cost-benefit decision up-front.

I would have been happy to pay for two or even three tickets, just to make sure the movie ran - and so I could have that opportunity to experience the art deco interior.

On the other hand, I am not sure it would have been worth buying up a fourth ticket. It was a very nice theatre - but $24 to see it would probably have been my limit. Also, as they only took cash, that was a limiting factor as well - I needed some money left over for popcorn and a drink.

Decor is nice to look at, but a movie without popcorn is just not the same.

Good luck with your projects, and if you ever get to Kansas City, make sure to go to the Rio Theatre in Overland Park. It will be well worth it - even if you need to buy an extra ticket.